Who Are The Biblical Hebrews? 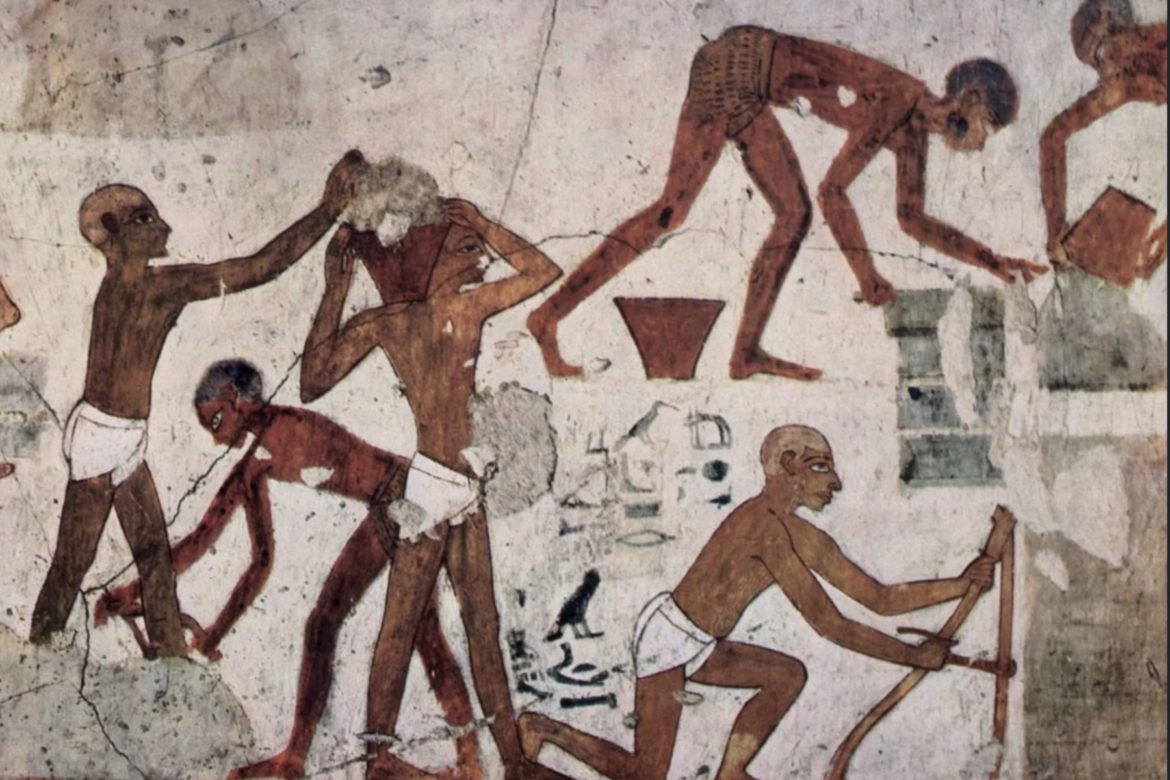 There has been much discussion about the Biblical Hebrews, the Children of Israel that GOD spoke to throughout the Old Testament. Where are they now and what ever happened to GOD’s promise concerning them? What happened with the curses with which he admonished them? While many have claimed to have these roots, there are scriptures in the Bible that provide valuable insight as to what they looked like, what language they spoke and who they could possibly be. In this document we will explore those questions and provide suggestions as to what those answers may be.

The history of the Children of Israel begins with the promise that GOD made to Abram, whose name was changed to Abraham. Abraham had a son named Isaac, who in turn had a son named Jacob. Jacob had 12 sons. Jacob’s 11 sons went to join their brother Joseph in Egypt. This history is found in the Book of Genesis chapters 12 through 50. 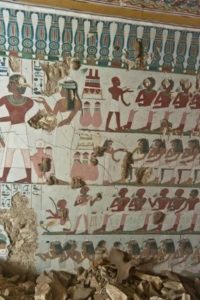 As you go through the first few books of the holy scriptures, some subtle observations from the Old Testament identify that those key figures like Jacob’s sons and Moses were men of color. From a historical perspective, we know the Ancient Egyptians would be considered in today’s terms “black” people, even. Photos taken during archeological digs of tombs in Egypt show images of Egyptians as a people of color.

When Joseph’s brethren went to Egypt to buy food (Genesis 42:8), they did not recognize their brother Joseph from the rest of the Egyptians. Even though Joseph was speaking a foreign language, if Joseph were what is considered today as “white,” they would have recognized their brother very easily amongst the darker skinned Egyptians.

Scriptures in Genesis (50:11) indicate that the inhabitants of the land of Canaan, current day Israel, who were also dark skinned according to ancient history, saw the mourning for Jacob and deemed all of the participants to be Egyptians. The fact that the Canaanites mistook the Children of Israel for Egyptians indicates that they must have had a similar physical feature related to skin color.

In the scriptural book of Leviticus (chapter 13), when discussing the plague of leprosy, better defined by the Hebrew term צָרָעַת, the symptoms of this disease speak to an ailment that would be more concerning in a darker skinned person. The plague manifests itself as bright white spots. White spots are troubling in dark skin, just as dark spots are concerning in white skin tones.
It is important to note, that leprosy as described in the Old Testament, is not the same ailment as the contemporary definition of leprosy, also called Hansen’s Disease. Leprosy as described in scripture, is an infection that manifests itself through loss of skin pigmentation originating from open wounds, while Hansen’s Disease tends to cause nerve damage and in some cases bumps on the skin.

Another facet that should be considered is linguistics. The Children of Israel, the Ancient Israelites spoke Hebrew. Hebrew is also the language that the Old Testament was originally written. Hebrew is grouped by linguistic experts as an Afro-Asiatic language due to the lingual similarities to other languages in the North Africa region.

Considering these two aspects, it makes sense to infer that the Children of Israel were a melanated people due to the region that they occupied and the language that they spoke. They share similar characteristics of skin color and language as the inhabitants of their neighboring countries. 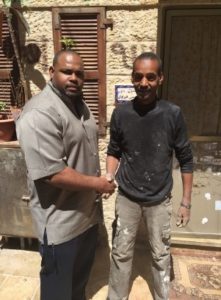 During a trip to Israel, I met with some of the native Palestinians, those who are rarely shown on television. One of the things that I noticed is the stark resemblance in some of our skin color overtones.

These are some of the more physical associations related to this scriptural people. When seeking further connections, we need to look to other Old Testament passages to determine their status based on historical reference.

From a historic perspective there is information about multiple “Jewish” Roman wars, until the final rebellion of the Judaic tribes is subdued in circa 136 CE when Roman Emperor Hadrian crushed the Bar Kokhba Revolt. Many historical references identify this period as the beginning of the Diaspora. The Diaspora, the Greek word for dispersion, being defined as the scattering of the Ancient Israelites from the land of Israel.

Returning to scriptural reference and how it correlates to historical accounts. The scriptural book of Deuteronomy discloses GOD’s warning to the Children of Israel of what would befall them if they did not follow the Torah. A synopsis of that prophecy is that they would be scattered to other countries, they would be captives where they would have yokes of iron around their necks. In bringing together the scriptural words with modern history, there is only one group of people that the punishments of Deuteronomy 28 happened to.

From a historical account the punishments designated to happen to the Children of Israel resemble the ordeals faced by those that were taken from the interiors of Northern and Central Africa that were brought to the Americas, the Caribbean and the ports in Europe via the Ivory Coast and middle passage of the Atlantic Ocean. 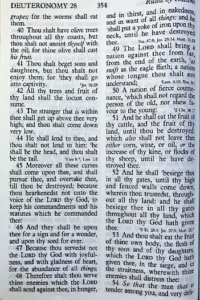 As it relates to those that endure the middle passage, there is no historical data referencing their history before they became captives to their European colonizers from the north. In comparing different accounts. It is also interesting that there is no historical data on the Ancient Israelites once the Diaspora began. In reconciling these two concepts you have a people who have no historical identity which dates to before their captivity started and you have a people who have no history after their captivity began.

Even with these gaps you also have so many similarities between the two groups. You have a people that originate from the same region, which is the North Central Africa region. The language that the Ancient Israelites spoke is linguistically like other languages in that North Africa region. The African captives currently have no relatable lingual identity before their slavery. Yet, when researching the history of the Afro-Asiatic Hebrew language, many references will indicate that the use of Hebrew became dormant in the 3RD century BCE, closely coinciding with the end of canonized scripture, and was “revived as a spoken language in the 19TH century CE.”

When viewed logically, you have people, the Ancient Israelites, that were prophesied to be scattered throughout various countries that were essentially “lost” for centuries. You have another group, the African captives, many of which were taken from their home and scattered to various countries, in the manner identified by the prophesies of the Ancient Israelites who were “lost.”

You have a language that has been dormant for a duration comparable to the time that the Ancient Israelites were lost. You have a land, the land of Israel, that was occupied by settlers and conquerors for the same duration that the original people, the Biblical Hebrews were lost, and the scriptural language was lost.

Above all you have the African captives whose plight is resoundingly like the prophesies testifying against the Ancient Israelites.

While the question of who the Biblical Hebrews are today remains somewhat obscure to most, we can correlate scripture with events, contemporary and current, to draw strong inferences as to who they can be. We can begin to compile and organize the pieces to this puzzle.
As the events of today are unfolding, where descendants of African captives are rising up all around the world telling a similar story of racism and oppression, each in their respective country, we should be willing to consider that the histories of the Biblical Hebrews and the African captives could be one.

ZBD in affiliation with www.beforetheseshores.org ALL RIGHTS RESERVED 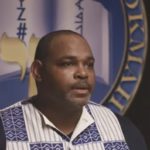 by Zaccar Dan, MBA C.C.M. Zaccar Dan has dedicated the majority of his life to spiritual enlightenment while uplifting his community. He is a minister that seeks to guide individuals through spiritual healing to determine a path back to God. He has studied Hebrew for more than 25 years and has taught it to many learning levels at his place of worship.

Zaccar also gives of himself to Ahm Zadik and Shomray HaBreet, two Brooklyn-based community organizations. He arranges sporting tournaments, disaster relief drives, food and clothing drives, and enrichment outings, such as museums, theme parks and many other community events.

Zaccar moderates panel discussions on a variety of social injustice topics and participates in many venues aimed at uplifting communities through spiritual, social and financial empowerment. He is also developing a website, “Before These Shores.” The goal is to determine, through research and historical reference, the in-depth historical past of the captives associated with the transatlantic slave trade.

As Zaccar’s social time is filled with many responsibilities, he has also been active in his faith-based and inner-city community. He mentors multiple New York City high school students through programs aimed at guiding “at risk” youth about the pitfalls facing inner-city youth. The goal is to guide these young men and women to overcome those obstacles to obtain a college education and begin a fulfilling career.

Zaccar holds an MBA, a Bachelor of Technology in Facilities Management, an A.A.S in Construction Management Technology and Construction Manager Certification, C.C.M. Through the firm he co-founded, Dan CM Consulting, he provides organizational and construction management consulting as a professional service to assist small to medium sized companies to compete in an extremely competitive market. Please feel free to read more at www.dancmc.com.

For Zaccar Dan, it has always been important to give back to the community, he feels giving back is among one of the most valuable and important deeds people should do.

I just started on the absorption class I need more info. I am a senior traditional leader in South Africa. Of the Amandebele clan