כך משנכנס אדר מרבין בשמחה
Everything you wanted to know (and really did not care to know) concerning the Israelite calendar.

Although there are many joyous days in the Israelite tradition, none of them encompass an entire month. This year, 5779 there are two months called Adar. Two months with the same name – how did that come to pass? It is said that when Adar enters, joy increases.1
The festival of Purim celebrates G-d’s triumph over the forces that sought and seek to vanquish us. Adar is the month in which Purim occurs and Purim is evidence that though others sought our destruction, G-d and circumstances intervened and we endured. So, this year we are blessed with double the joy! Let us examine why we have twice the joy and happiness this year.

The United States and many other westernized countries employ the Gregorian calendar. The Gregorian calendar introduced by Pope Gregory XIII in 1582 is the most widely used civil calendar in the world. It is a solar calendar based upon 365.2425 days in a calendar year and every 4th year an additional day is added to the month of February. The years in which an additional day is added are commonly called leap years.2

The Torah enjoins us to mark and keep the new moons3
therefore we have a lunar calendar. The lunar year is 354 days. A standard Israelite year has twelve months; six twenty-nine-day months, and six thirty-day months, for a total of 354 days. It is 354 days because our months follow the lunar orbit, which is approximately 29.5 days. Due to variations in the Jewish calendar, the year could also be 353 or 355 days.4

Since the lunar year is 354 days (months alternating between 29 and 30 days), and if we just employed a lunar system, the festivals and holidays would occur approximately 11 days earlier each year in relation to the solar year, with the result being that every three years the calendar would be more than a solar month behind, and every nine years the lunar calendar would be one season earlier than the solar calendar.
As per the directives in the Torah, Pesach (Passover) must be celebrated during the Spring5
and Sukkot (Tabernacles) in the Autumn6. In fact, all the biblical festivals -Passover, Shavuot and Sukkot — are dependent upon the agricultural seasons. Pesach (Passover) is dependent upon the barley being in a state of “aviv”7. “Chag HaBikurim” – the festival of the first fruits festival and Sukkot, “Chag Ha’Asif” -the harvest festival. The calendar needs to ensure that all the festivals are celebrated in their proper seasons. For these חגימ – haggim (holidays) to occur in their respective season, adjustments have to be made to the lunar calendar. Every 3rd, 6th, 8th, 11th, 14th, 17th, and 19th year of each 19 year cycle, an entire month is added before the month in which Passover falls. Thus, in reality our calendar is a solar/lunar calendar.

The solar/lunar calendar that we currently employ is fixed, meaning that calculations are used to set the calendar. Prior to the time of Hillel when the fixed calendar was made the standard, the Hebrew calendar used a combination of both observations and calculations. There were many factors involved in determining when the year should be intercalated. One of the rules of intercalation was that by the beginning of the first month (Nisan), barley had to be ripe enough8. If it was not ripe enough by the end of the 12th month (Adar), then a 13th month (Adar II) was added. Rashi, commenting on Deuteronomy 16:1, based on TB Sanhedrin 11b, discussion9 explains: “Observe the month of spring (aviv): Before it [Nisan] arrives, watch that it should be fit for the aviv ripening [capable of producing ripe ears of barley by the sixteenth of the month], to offer up in it the omer offering. In other words, by Nissan 16 when the barley omer offering is made, the barley must be ripe and ready to be harvested. This means that prior to the beginning of the first month, the barley must be in a state close to ripening called ‘aviv’. If the barley is not aviv, then a 13 month is added and it is thus proclaimed a leap year or שנה מעוברת shanah meuberet (pregnant year)10. This system allows a delay of one month, until the barley ripens.” In addition to the observation of the barley there were several non-seasonal factors that the Sanhedrin could consider in the setting of the calendar. For example, if the roads or bridges were in disrepair due to the winter rainy season, thus impeding the ability of the pilgrims to travel to Jerusalem for Passover11.

In the observational calendar discussed above there was no set calendar. The calendar varied irregularly as it was dependent upon the testimony of witnesses who had sighted the new moon12, and agricultural variances. It was the responsibility the Sanhedrin (the rabbinical supreme court) to annually determine whether the year would be declared a leap year. During the time of Hillel II, the last President of the Sanhedrin, the Romans forbade this practice, therefore Hillel II was obligated to institute a fixed calendar13. The consequence of this decision furnished the Sanhedrin’s advance/prior approval for the calendars of all future generations14. According to this calendar, every month of the year, with the exception of three months has a set number of days: 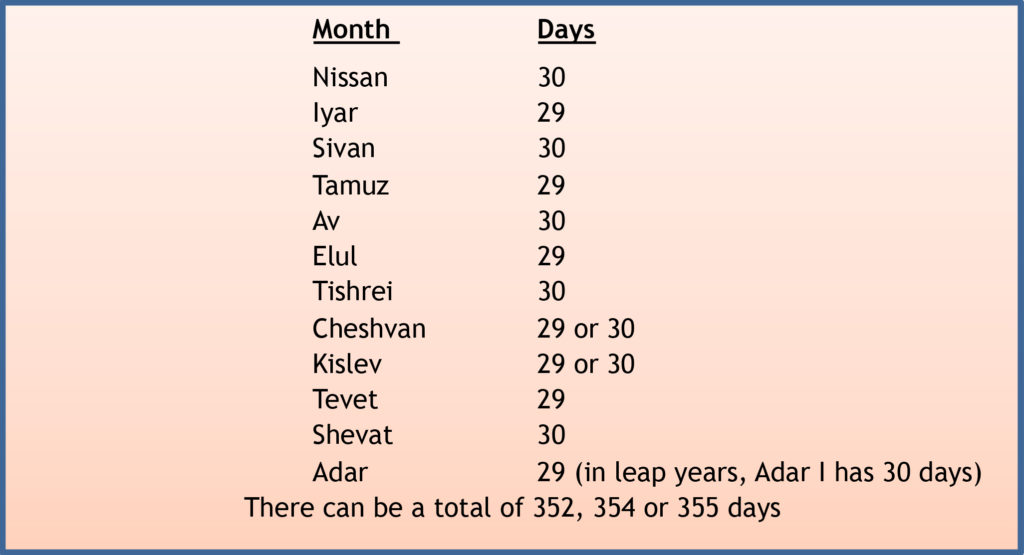 For the variable months of Kislev and Cheshvan, there are three possibilities: 1) Both months can be 29 days (the type of year is called חסרה chaser-lacking/missing), 2) both can be 30 days (the year is called שלימה full, complete), or 3) Cheshvan is 29 and Kislev is 30 (the year is called כסדרה kesidrah. or k’sidran, regular, meaning these two months follow the alternating pattern of the rest of the months). Hillel also established the rules that are used to determine whether a year is chaser, shlemah or k’sidran.

The rules of the perpetual or fixed calendar also ensure that the first day of Rosh Hashanah will never occur on Sunday, Wednesday or Friday. This was done to ensure that Yom Kippur will not directly precede or follow Shabbat, and that Hoshana Rabbah would not fall on a Shabbat. These rules were instituted in order not to produce practical difficulties for the population15.

According to the rules of the Hillel calendar, this year 5779 (2019) is a leap year16, thus we have two months of Adar – Adar I and Adar II.  For sixty days, from Feb. 4, 2019 until April 6, 2019 it is a true a mitzvah to be extra happy.  May we all take this mitzvah to heart and celebrate and be happy. Let us celebrate with double happiness, double thankfulness, double the donations to charitable causes, double the forgiveness extended to ourselves and to others, double the love shown to our fellow Israelites and Gentiles.  Let us also double our devotion to G-d and G-d’s commands and last but not least let us double our devotion to social justice and tikkun olam or repairing the world! 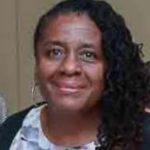 by Rabbi Dr. Malchah, the Associate Dean of the Israelite Academy in Chicago.