Scripture
Vision of the Dry Bones: Ezekiel 37:1-28
The Book of Shemot (Exodus): Chapter 12
Deuteronomy 4
Home News & Politics What If No Agreement Is Reached on Iran’s Nuclear Program?
News & Politics

What If No Agreement Is Reached on Iran’s Nuclear Program? 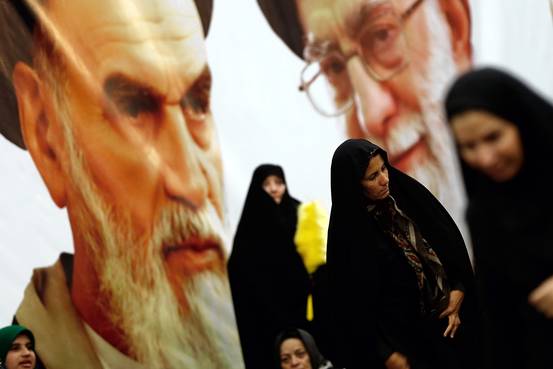 Iranian women in front of a poster with portraits of the late Ayatolah Ruhollah Khomeini, at left, and Iran’s supreme leader, Ayatollah Ali Khamenei, on June 3.   Abedin Taherkenareh/European Pressphoto Agency

President Barack Obama threatened Tuesday to walk away from nuclear negotiations if Iran doesn’t adhere to the principles it agreed to in April. Negotiators have formally extended talks to July 7 to give themselves additional time to conclude an agreement. I’m still betting on a deal in July. But what if there is no deal?

Let’s step back from the politics and the talking points.

Much depends on how the talks collapse: Who takes the hit will be important in the political positioning that inevitably follows the demise of a deal. But this is more than a spin game. If negotiations break down because Iran’s supreme leader, Ayatollah Ali Khamenei, won’t abandon any of the (unreasonable) red lines he articulated last week, the situation might be less severe. The sanctions regime against Iran is likely to hold or even be ratcheted up as the international community realizes that Iran was the uncooperative party or, worse, that its negotiators had been played.

On the other hand, if the talks collapse because Russia and China–which are much less concerned about Iran’s nuclear program than the other permanent members of the U.N. Security Council, or Germany–think that Washington hadn’t given enough, sanctions might weaken. Vladimir Putin may well be looking for a way to demonstrate his independence from the “P5+1″ and to broaden Russian-Iranian commercial opportunities. Should Congress be seen as scuttling the accord, the French and British might also be much less willing to maintain strict sanctions, particularly if Iran was perceived to demonstrate real flexibility.

Would the end of diplomacy lead to an immediate crisis? Obama administration officials would like to create an image that war and crisis are the alternative to a nuclear agreement. I think they even believe this. (And, over time, who would rule it out?) But the interim agreement of November 2013 could create a measure of stability. It really does serve–at least temporarily–the interests of both sides. Much will depend on how Iran responds. Will Tehran accelerate its nuclear program to show the world it means business and can’t be pushed around? Probably not. More likely is that Iran would remain several months away from “break-out” status, at least in part, to see what advantage it might gain from trying to divide the coalition and damaging the international consensus arrayed against it. Tehran has no interest in provoking a military response against its nuclear sites. At a minimum, it will want to see whether the breakdown might not allow a return to the negotiating table under even more favorable terms. The Tehran regime, and certainly the hardest-line factions in Iran, continue to believe that the West needs this deal more than it does. Paradoxically, this overconfidence might temper Iranian readiness for confrontation.

Would the breakdown of diplomacy mean war? Not necessarily, because the costs of risking military action (if you’re Israel) or courting it (if you’re Iran) are considerable. In the wake of no agreement, it’s more likely that Israel would try to see how it could turn the failure to its advantage, particularly if Iran was blamed for the collapse. There would be a tsunami of “I told you so”s and perhaps a campaign to increase the pressure of sanctions. Israelis are reluctant to admit it, but the interim agreement reached in 2013 has worked better than they expected. Meanwhile, Iran would not want to push Israel or the U.S. by trying to break out to a bomb, at least not until Tehran had examined all the options.

The politically inconvenient truth is that, deal or no deal, the most serious threat Iran poses right now is in its behavior in the region–not the bomb. And no agreement will weaken the pro-negotiation crowd, particularly President Hasan Rouhani. Whether or not Iran intends eventually to weaponize, its real dangers lie in its bid to increase its influence in Iraq; to buck up the Assad regime in Syria; to stick it to the Saudis in Yemen; and to support and arm Hezbollah in Lebanon. Director of National Intelligence James Clapper recently wrote about the threats that Iran poses. Sure, a failure to reach an agreement could lead Iran to push for a weapon and, over time, lead to a conflict with Israel. But Iran’s preferred course of action is much more likely to be sustaining its bid to fashion a sphere of influence in the region quite inimical to U.S. interests. And, unfortunately, it’s likely to continue this quest whether or not a nuclear accord is reached.

The opinions expressed here are solely those of the author.

This article was originally published in the Wall Street Journal..

Crisis in the Eurozone