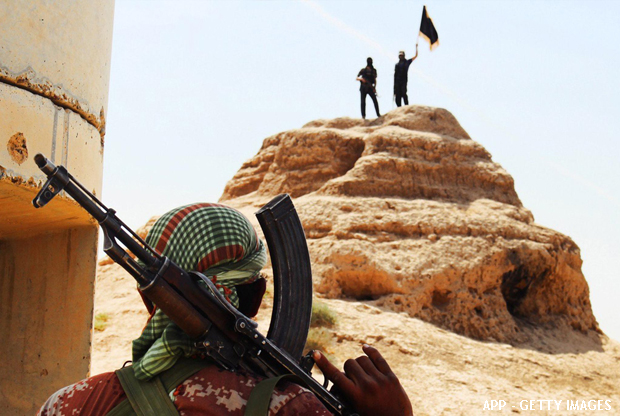 Nobody in America wanted to spend generations fighting terrorists, but that’s what it’s going to take.

In 2013, there were 16 Americans killed in terrorist attacks around the world, according to State Department figures. In the same time period, 33 Americans died here at home when lightning struck them. Such numbers should make it clear that terrorist violence in and of itself does not present an immediate strategic threat to the United States. Indeed, since 9/11 there hasn’t been a single successful attack by a foreign terrorist organization on American soil.

But last week’s attacks in Paris and the disruption of another plot in Belgium on Thursday night show, all too tragically, that the danger must not be trivialized.

The fact is, we are living in an age of jihadi terror. And the threat and likelihood of more attacks will be with us for years to come.

President Obama has said that we will “ultimately defeat ISIL,” the self-declared Islamic State also known as ISIS. Back in 2013 the president went so far as to suggest that that the war on terror was over. But he’s wrong on both counts. And here’s why.

First, we have yet to take care of old business. Talk to any terrorism analyst or CIA or FBI counterterrorism expert and they’ll tell you that the most immediate threat to the United States comes not from ISIS but from an al Qaeda affiliate, Al-Qaeda in the Arabian Peninsula. Sure we‘ve had great success against the old core al Qaeda in Afghanistan and Pakistan, killing Osama Bin Laden and most of his top lieutenants, and dismantling infrastructure. But the Paris attacks were either directed or inspired by AQAP, making it obvious that almost 15 years after 9/11 we have yet to “defeat al-Qaeda.”

Indeed, if French intelligence about the Paris attacks is accurate then dead men like the American born jihadi Anwar al Awlaki—killed in a U.S. drone strike in Yemen in 2011—continue to live on, encouraging and inspiring minions like the Charlie Hebdo killers. And a perfect European storm is gathering strength from the convergence of rising right wing, nativist, anti-immigration sentiment, increasing economic dislocation, and an already alienated and disenfranchised pool of European Muslims vulnerable to jihadi recruitment.

This is very much a clash of values and gets to the heart of what it means to be modern and to live in a 21st century world.

Second, jihadi terror didn’t grow in a bell jar. It’s the product of an angry, broken and dysfunctional Middle East where large ungoverned spaces in Syria, Iraq, Yemen, and Libya, and widespread bad governance or no governance at all, combine with a growing sectarian divide between Sunni and Shia to feed extremism and violence.  By killing his own Sunni citizens, Syria’s Bashar Assad creates new recruits for ISIS faster than the U.S. and its allies can train Syrian rebels to oppose him.

For years, Saudi Arabia tried to co-opt radical Islamists by financing them. And Saudi and other Gulf states have spread their own form of fundamentalism by supporting Islamic schools and mosques throughout the Middle East and South Asia. The Qataris, Saudis and Kuwaitis all provide money and guns to a variety of Islamist fighters in Syria. The key to beating ISIS is good governance on both sides of the Syrian and Iraqi border, including security, stability, prosperity, inclusiveness and respect for minorities.  And yet today the first state has failed; and the second will remain at best a perennially fraught enterprise. The Arab Middle East is likely to remain a perfect breeding ground for jihadi enterprises for years to come.

Third, it’s unfashionable and politically incorrect these days to talk about a clash of values, let alone of civilizations, when it comes to analyzing the West’s conflicts with the Middle East. Better, we’re told, to talk about clashing interests which, unlike values, can be reconciled and ameliorated. But for a disturbingly large minority of Muslims and many more who are prepared to acquiesce, there is no tolerance or respect for the West’s conception of free speech or freedom of religion, let alone freedom of conscience. Of the 21 countries that have laws against apostasy, all have Muslim majorities. And of the 24 countries with the most restrictive provisions against religious freedom, 19 are Muslim.

The attacks against Charlie Hebdo’s irreverent cartoonists weren’t the first by Muslims against Westerners who dared offend their religious sensibilities; and, tragically, they won’t be the last.

Modernity requires —even demands—the late Fouad Ajami insisted —the capacity to be offended. Societies flourish and grow through critical inquiry, freedom of expression, artistic creativity that breaks icons and challenges convention through the use of humor and satire that often offends. However objectionable willful offense to religion may be, it cannot justify in a civilized society violence and terror. The Paris attacks were very much driven by a fundamental clash of values and gets to the heart of what it means to live, and yes to thrive in a modern world. When Saudia Arabia a close ally of the U.S. sentences one of its citizens to 1,000 strokes of a cane for his liberal views, it cannot be described as anything else but a clash of values between the right to freedom of speech and conscience and intolerance and repression.

Fourth, radical Islam and much of the mainstream opinion in the Arab world has a major problem with the West, particularly with the United States, Britain and France.  The colonial legacy still hangs heavy in the lands of the Arabs, complete with the kind of conspiracy theories that have the CIA or Mossad responsible for much that occurs there.

At times U.S. policies seem to validate those views and make an already bad situation worse. However well intentioned, the 2003 invasion of Iraq is one example of that heavy hand, and became paradigm for modern-day colonialism, even though it freed Iraqis from a brutal master. The invasion actually led to the creation of al Qaeda in Iraq, the progenitor of ISIS. And the occupation of Iraq helped feed the conspiracy theory that Washington was supporting new Shia masters in Iraq, Sryia, and Iran against the Sunnis.

It is no coincidence that America’s two closest Middle East allies—Israel and the Saudi Arabia—have starring roles in the jihadi narrative, the first in al Qaeda tropes as an illegitimate Islamic regime (the near enemy); and the second as the oppressor of Palestinians and, perhaps worse, in anti-Semitic conceits as the despised Jews.

The long war against jihadi radicalism has already emerged as one of the most formidable security and political challenges of the 21st century, much as the Cold War was to the latter half of the 20th. Indeed, in this regard, the Paris attacks were less game changers than a painful  reminder of how terrifying and tragic the long war is likely to become.

The opinions expressed here are solely those of the author.

By Aaron David Miller. This article was originally published in The Daily Beast.

The Importance of a Good Character

The Book of Shemot (Exodus): Chapter 12