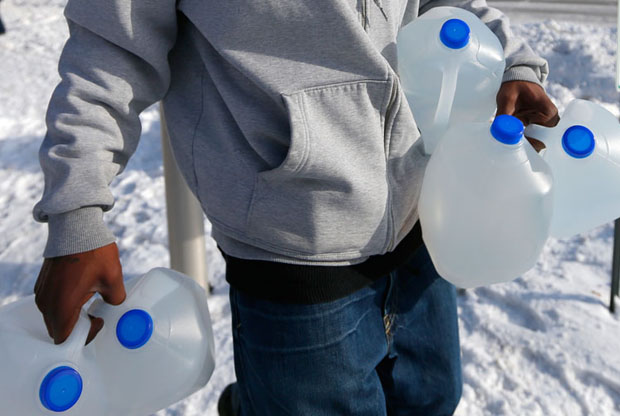 In this Feb. 3, 2015, photo, Lemott Thomas carries free water being distributed at the Lincoln Park United Methodist Church in Flint, Mich. Since the financially struggling city broke away from the Detroit water system last year, residents have been unhappy with the smell, taste and appearance of water from the city’s river as they await the completion of a pipe to Lake Huron. They also have raised health concerns, reporting rashes, hair loss and other problems. A General Motors plant stopped using the water, saying it was rusting its parts. (AP Photo/Paul Sancy

Most Americans have heard of the crisis that has unfolded since Flint, Michigan decided in April 2014 to source its water from the Flint River—a decision that exposed citizens to dangerous levels of lead as the new water corroded existing distribution pipes. While the immediate health hazard and its possible future effects have dominated the story, another important chapter is unfolding as the state and federal governments battle over whether the situation deserves disaster status.

Michigan Governor Rick Snyder last week requested a federal disaster declaration, but the federal administration granted only a more limited emergency declaration. The governor has since appealed. Though the need to immediately provide safe water to the city’s almost 100,000 citizens is undeniable, the use of disaster and emergency program assistance is flawed on several counts.

The urgency to rectify this crisis should have been felt a year and a half ago, when changes in water quality were first noticed, or when lead was detected over a half year ago. Instead, city officials waited until this past October to switch the water source back to the pre-2014 Detroit sources, and waited until now to seek federal help.

The federal administration has argued that a federal disaster declaration (as opposed to the emergency order that was granted) is meant for natural disasters. Typically, this includes hurricanes, floods, wildfires, and earthquakes—that is, environmental disasters whose economic and personal damage exceed what any individual community in the country can reasonably absorb on its own.

The request for a federal disaster declaration flies in the face of the nature of federal emergency aid. The Stafford Act says governors can request a federal declaration and the assistance it provides when they “show that the disaster is of such severity and magnitude that effective response is beyond the capabilities of the state and the local governments…”

What should the federal government do when the state and the local governments intensify the severity and magnitude of a crisis?  And what should be done when the crisis is human-made? Disaster declarations are not meant to fix bad local and state decisions.

Paying to rectify poor water infrastructure decisions and to compensate for delayed monitoring or regulation of water quality with emergency management funds blurs the underlying missions of distinct public agencies. But this is not just a bureaucratic consideration.

There is another disturbing concern beyond how we define disasters: the Flint request serves to feed the notion that punting the problem—any problem—works.

We’ve seen this even with regard to mitigation and preparedness for natural hazards over the last half century. More recently, we have funded infrastructure maintenance at frighteningly low levelsand have undervalued environmental enforcement. Now, we’re seeing this neglect with regard to climate change adaptation.

If an ounce of prevention is worth a pound of cure, we’ve decided to simply wait until the disease is full blown. Then, we as Americans have no choice but to pay for the pound.

At this point, the national government should indeed get involved in Flint’s water crisis. Providing the $5 million in immediate aid for clean water and exploring health services is a good start for the people of Flint. Working with communities to plan for better infrastructure, funding those developments, and adequately enforcing environmental laws will help reduce the number of future similar crises from becoming disasters.

And, we will face more of these crises.

By Carlos Martín for the Urban Institute.

Wisdom of Our Fathers: Lessons from Joseph