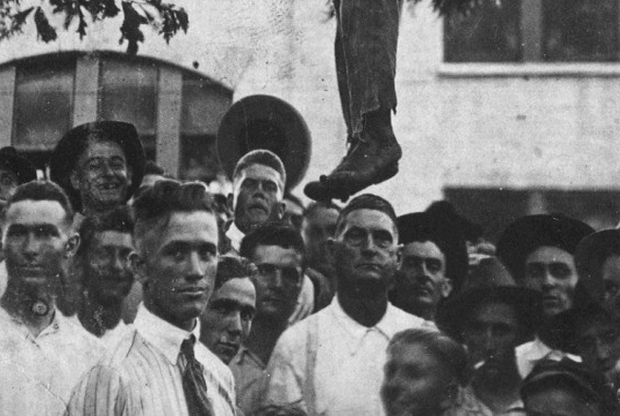 “…While we appreciate the right of our citizens to protest and applaud the fact that, to date, the protests have been peaceful, we are very concerned about the rhetoric of the protests. In fact, the images seen on television look and sound much like a lynch mob in that they are calling for the immediate imprisonment of these officers without them ever receiving the due process that is the Constitutional right of every citizen, including law enforcement officers…”

-Excerpt from the Baltimore Fraternal Order of Police statement-
The recent statement issued by the Baltimore Fraternal Order of Police (BFOP) comparing the indignant protesters in arms over the police related death of Freddie Gray to a “lynch mob” adds insult to injury to the greater Black community in America due to the historical terrorism that we have faced from lynch mobs, which has included police repression. This statement comes on the heels of the Missouri National Guard calling the protesters for Michael Brown enemy forces. So with the recent rash of police murders of unarmed Black’s in tandem with the media’s demonization of protesters and the militarized presence of police, this statement clearly demonstrates that the ghost of Jim Crow’s past continues to haunt America as many of the murderers who are police do so with impunity.
Hypocritically, what this statement also does is continues to demonize and blame the victims of the American White Supremacist construct, while casting the perpetrators of White Supremacy as the victims. This horrendously exacerbated statement is historically inaccurate, relative to the past and present lynch mobs of which Blacks have suffered the worst fate at their cruel hands, and therefore needs to be recanted by the BFOP due to its insensitive and mendacious nature. What the BFOP fails to acknowledge is the exhaustion and exasperation of the Black community in response to the continual heinous and unjustified extrajudicial executions of members of the Black community.
In light of the numerous extrajudicial executions of unarmed Blacks, it is absolutely deplorable how the BFOP statement recognized the “Constitutional right” of due process that the officers involved in Freddie Gray’s murder are being afforded, while none of the victims who have lost their lives from these rogue police officers ever had a chance to experience. This is an injustice that the Black community has continued to face, with men, women and children suffering murder after murder at the hands of street vigilantes and police officers who have played the role of jury, judge and executioner. And while I do believe in the rule of law and the righteous carrying out of justice, this statement is an outright insult to the Black community which demonstrates an utter disregard and contempt for Black life in America with the BFOP’s tasteless and spiteful reference to lynch mobs. As victims of state sponsored brutality, from plantation patrols to police forces, Blacks in America are and have been without sanctuary in law or its enforcement thereof. The continued onslaught against Black life in America shows the blatant contempt that the system in its entirety has for those who are classified in America as Black. As an individual who strives to be a man of peace, truth, justice, love and respect in Torah, and seeking to redress the grievances that are present with the Black Community in America, I find it absolutely hypocritical that the BFOP statement has been issued without providing any clear evidence to date of how Freddie Gray died in police custody. But it is such statements as these that provides me with the insight that what is taking is place is nothing less than the incitement of the Black community to riot by the powers that be in order to justify the rounding up and hauling off of the Black community to FEMA Camps where only the Most High knows what then will take place. Our best bet, as a community, is to find ways to further distance ourselves from the clear and present dangers that lurk in governmental structures in order to ensure our survival, and not fall to the traps that are being set for us. For it is only until we we are able to insulate ourselves from the existential threats that have been assailing us for the past 400 plus years in America, that we will be able to thrive as we once did before in our homelands from where we were stripped and forced to suffer in the most nightmarish of conditions in the blood drenched land of police killing sprees and home of the institutionally enslaved.