Amar’e Stoudemire Is on a Religious Quest 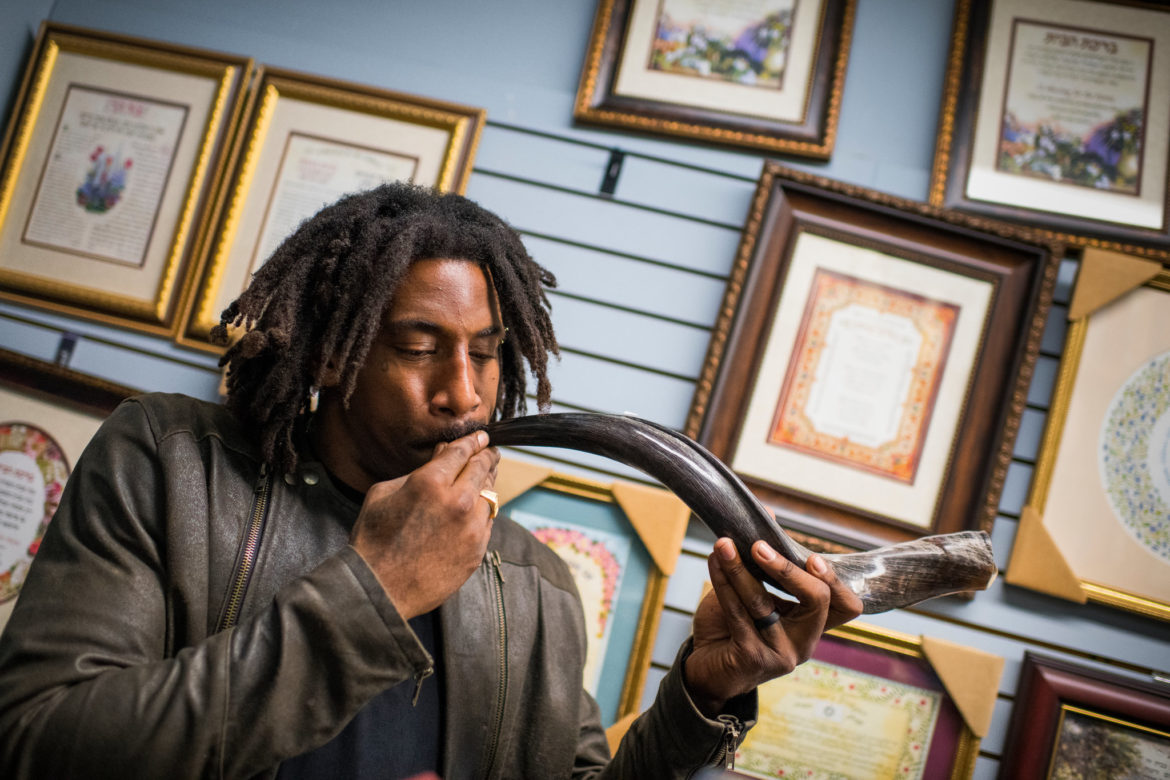 Accompanying the former N.B.A. star as he explores Jewish landmarks in New York.

The halls of the Jewish Museum in Manhattan were hushed and dim as Amar’e Stoudemire stepped inside. At nearly seven feet tall, the former New York Knicks star towered over the smattering of other visitors.

With furrowed brow, he considered dozens of Jewish relics on display: a chunk of carved third-century marble, twinkling candelabra and a carved wooden chest for keeping the Torah, the sacred scrolls of Judaism.

Mr. Stoudemire had just announced, only hours earlier, hopes of returningto the N.B.A. after leaving two years ago, but he’d reserved the afternoon for showing his spiritual side.

At 35, he is part sports mogul, part holy man. With some 15 years as a basketball star, Mr. Stoudemire has stepped out as an entrepreneur, dipping into the art and fashion worlds, opening a winery and publishing a series of books. He is also taking what he frequently calls a “spiritual journey” into the Bible, Israel and Judaism. It’s a turn that has fascinated and confounded some observers.

A museum employee hurried behind Mr. Stoudemire to point out pieces of interest, sprinkling her sentences with Yiddish and craning to make eye contact. But Mr. Stoudemire seemed at ease among the cases of Judaica, explaining items to two friends and his wife, Alexis Welch, who accompanied him.

Walking past a collection of ritual rams’ horns from the 18th century, one friend asked, “Have you ever played one, Amar’e?” Mr. Stoudemire nodded. “It takes practice to find the right channel,” he said, “but it’s a profound sound.”

Mr. Stoudemire was raised in a churchgoing home but has long felt more of an affinity for the ancient Hebrews of the Bible than for modern-day Christians. He has made a dozen pilgrimages to Israel, the first in 2010 (and would one day like to move there), and studies Torah daily, peppering his social media feed with Hebrew words and phrases. He also uses a biblical moniker, Yehosaphat.

This name was splashed in big white letters on the black leather jacket he wore to the museum. Two necklaces glittered on his chest; one, a Hebrew menorah, the other, a Jesus medallion.

His faith mixes elements of Christianity and Judaism and draws deeply from Hebrew Israelite traditions — a complex set of faith groups bound together by a belief that African-Americans are the true descendants of the biblical Israelites. “I’m an Israelite. That’s just who I am,” he said.

Around 2012, the same year he married his longtime girlfriend and was mourning the death of his older brother, Mr. Stoudemire delved deeper into religious study. He became involved in a Jesus-worshiping Hebrew Israelite organization, Israel of God, where he was baptized in 2013; he has also been studying alongside Jewish rabbis since around that same time.Mr. Stoudemire seems undeterred by religious gatekeepers who might discourage such exploration. “I study with elders, with rabbis, with everyone,” he said. “I don’t limit myself.”

And Mr. Stoudemire’s faith has animated his professional forays. In 2014, he produced a documentary, “Village of Peace,” about a longtime Hebrew Israelite community in Dimona, Israel. Mr. Stoudemire calls his mushrooming private miscellany of art — including a Jean-Michel Basquiat canvas, among some 70 other pieces — the Melech Collection, using a Hebrew word for king.

A new addition to this collection is a 45-foot mural depicting the fiery siege of Jerusalem’s Second Temple in A.D. 70. (The piece, “The Temple Within,” by the artist Steven Cogle, was unveiled at Scope Miami Beach in December.) And his new wine label, Stoudemire Cellars, released three new bottles in time for Passover this year: a cabernet sauvignon and other blends of red, all kosher and made from grapes crushed at an Israeli vineyard. Mr. Stoudemire also hosts an internet course on the popular legends of the biblical Lost Tribes of Israel.

Sitting, slightly hunched, with his entourage at Russ & Daughters Cafe in the basement of the museum, Mr. Stoudemire picked at his salad with a fork. Across from him, Ms. Welch ate an everything bagel with thick slabs of lox. “You just can’t go wrong with this,” she said.

When he was in his 20s, and during eight seasons with the Phoenix Suns, Mr. Stoudemire was a dynamic and oft-copied player. In 2010, he signed a lucrative and much-hyped deal with the Knicks but suffered a series ofdebilitating knee injuries in the following years.

He left the N.B.A. in 2016 to play professionally in Israel for the team Hapoel Jerusalem, in which he had an ownership stake. (In farewell notes, Mr. Stoudemire insisted his departure wasn’t about “collecting a paycheck overseas” but returning to what he saw as his ancestral homeland.) His move was a coup for the Jerusalem club, and the Stoudemire family was treated like royalty by locals.

But there were also tensions overseas with the head coach and referees, as well as a flare-up over comments he made about how he would react to a gay teammate. (Mr. Stoudemire later apologized.) Though Mr. Stoudemire led Hapoel to victory in the 2017 Israeli Premier League championship, his contract wasn’t immediately renewed. Hapoel has expressed renewed interest in recent weeks, and if an N.B.A. offer fails to materialize, Mr. Stoudemire could return to Jerusalem.

After the museum, the group was chauffeured downtown in a shiny black S.U.V to J. Levine Judaica & Books, a cluttered shop for religious objects that holds sentimental value for Ms. Welch and Mr. Stoudemire. On the occasion of the couple’s New York rooftop wedding in 2012, Mr. Stoudemire picked up a new Jewish prayer shawl from this shop.

Danny Levine, the shop’s longtime owner, greeted the couple dressed in a suit and wide patterned tie. “Welcome to Jewish New York,” he said, spreading his arms out with a showman’s flair. “Since 1905!”

Muffled Hebrew chants played overhead as Mr. Stoudemire walked through the narrow aisles of the shop, thumbing through books. “I have this one,” he said, pulling out a title. “Look — Samson!” he said, pointing to an illustration of the mighty, longhaired Israelite warrior.

Mr. Levine hovered nearby. “We knew Amar’e was getting into Judaism,” he said. “We’re very proud.”

Conversation took a Talmudic turn. Mr. Stoudemire shared something he had learned about the biblical tale of Noah’s Ark. There’s a common misconception that every known animal was on the boat, Mr. Stoudemire said, when, in fact, many modern animals (like house cats, for example) developed after the great deluge wiped the earth clean. “The animals kept evolving,” Mr. Stoudemire said.

Mr. Levine scratched his chin and added, “Yes, and we’re all traveling on an ark still.”

by Sam Kestenbaum for the New York Times.

LeBron James: Trump is dividing us